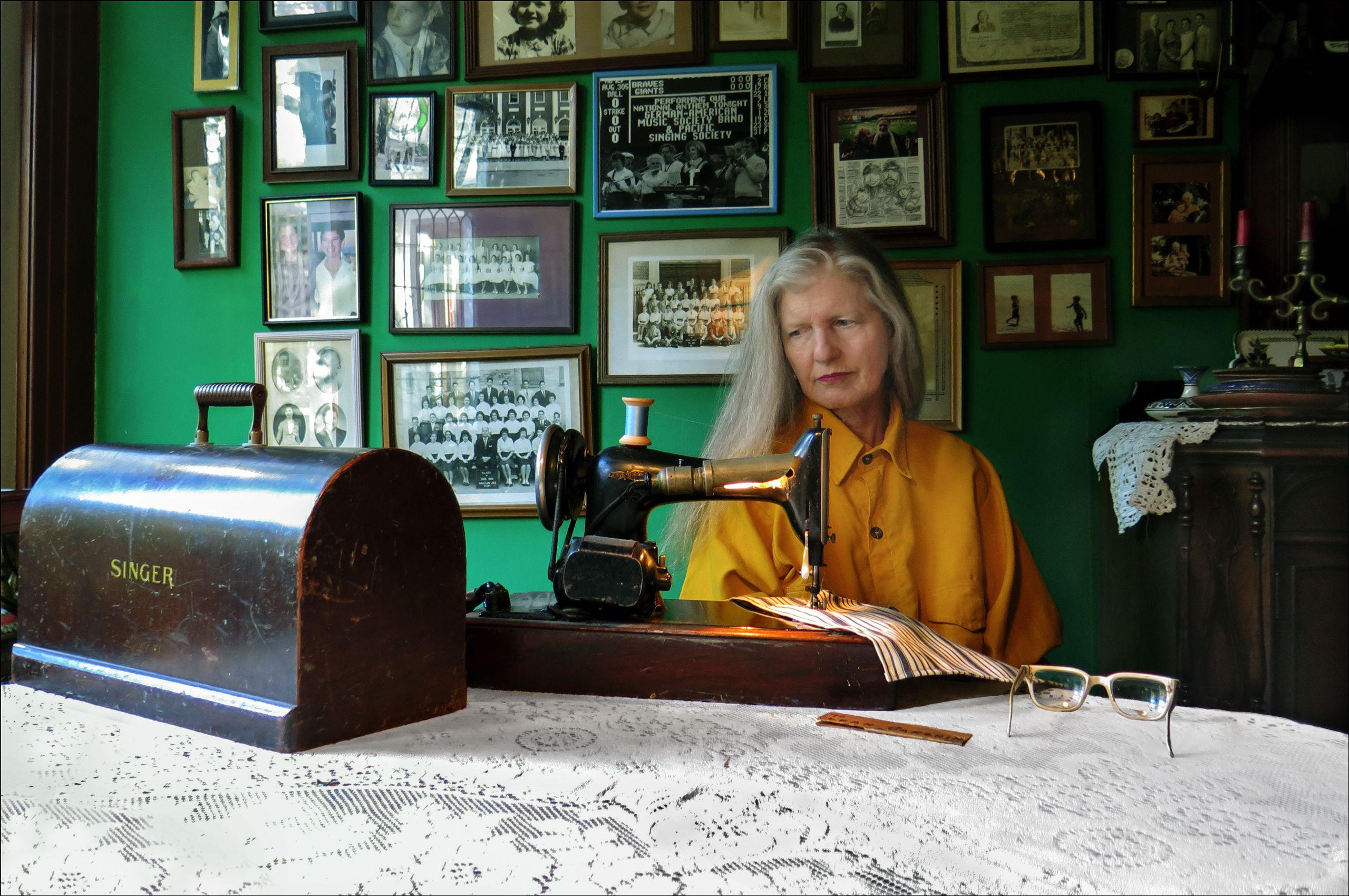 Location: Photo session in my house in San Francisco

My chosen object is my grandparents’ Singer sewing machine, purchased by them in 1923, which was a great year for them. At approximately the same time, they moved from the Bronx to a new house in (pre-hip) Brooklyn, and acquired not only the machine, but a dining room set and also a piano. Having come to the United States only 10 or so years before, owning these goods was sign that they’d made the middle class. I grew up in the downstairs flat of that Brooklyn house, with my grandparents living upstairs.

My grandfather went into the sewing business with a man he met on the boat coming over from Europe; my grandmother had worked in a textile factory in Poland from the time she was 10 or so. My grandfather and his partner turned from sewing to building after World War I, but he never never let his skills at the machine get rusty.

As I grew up, Nanny and Poppy, as I called them, spent hours bent over that sewing machine, always opened on the kitchen table in front of the window. They made matching dresses for my sister and me, they narrowed the legs of our pants when dungarees become blue jeans. And out of scraps of upholstery material they salvaged from a cousin’s bedspread business, they made aprons that were Christmas gifts for every one of my elementary school teachers.

Their daughter, my mother, lived downstairs, but when they visited their sons, who’d grown up, gotten married and moved to New Jersey and Long Island, they always dragged along the sewing machine. They repaired pockets, hemmed pants and skits, and put patches on the torn knees of pants for all their grandchildren.

The sound of that 1923 Singer, something like a purr but a purr with a sore throat, transports me to crawling around at their feet while they were sewing. I’d been assigned the job of picking up the pins they dropped. Eventually, they taught me to sew, too, doll clothes at first.

My grandmother died in 1973, then my grandfather three years later. One daughter-in-law wanted their Czech wine glasses; one grand-daughter wanted the pearls. It was always assumed I’d get the piano, which had long before been handed down to my mother; and the dining room set had enough parts that a few of us came away with pieces..

I asked for the sewing machine, and there was no opposition. My mother shipped it out to California, and I’ve left the label she wrote by hand -- yellowed and torn now -- attached by wire to the handle of the case. The electrical cord that powers the machine is taped together where it plugs into the machine.

Perhaps 25 years ago, when I brought the machine in for maintenance -- I’d be surprised if my grandparents had ever done such a thing -- the repairman said if it worked, to just leave that messily-taped part alone. “Good enough” is what the Singer says to me. “Value things that last,” is what my grandparents taught me.

The best part of owning this scuffed black behemoth -- the appliance equivalent of a London taxi -- it is that I can’t even think of it as a machine, a hunk of metal. The picture in my mind is always of the machine open on the kitchen table, with one of my grandparents bent over it. Nanny’s glasses, scratched and splattered with bits of whatever she’d been cooking, are resting on the bed next to the needle foot.

And I’m either doing my pin-seeking job or taking a break, pretend horseback riding on the rounded cover of the wooden case.